Going In For A Dip

I think that, over many posts, I have tried to re-vivify the notion of the need for love in this world, as love is the natural expression of the Divine. But there are some that would say, "Where is this Divine Love? So much suffering goes on, children are slaughtered, maimed, abused and made hungry, and yet you call on us to believe in the unseeable who does not seem to care about what's going on!"

This was the kind of argument returned by those who had witnessed the bloody futility of the Western Front in World War One, and it is not easy to answer - though there is a direct answer.

But rather than trying to answer head-on, as it were, perhaps it is wise to open our eyes and look for evidence around us of Divine Love.

This past week I was inspired - for some reason - to look more into the nature of water. I was not looking into this subject with any result in mind, but I felt that it is a topic worth knowing more about. Particularly as we depend upon it for life itself. After all, adults are each composed of seven-tenths water as, indeed, is the whole of the planet.

So I found a book that perhaps has been read by many, but has got lost in the mayhem that the world has experienced this last 20 years. It's a book that was first published in 2001, called "The Hidden Messages In Water" by Dr. Masaru Emoto. In it there are some fascinating accounts of water crystal formations that were formed depending on what words were shown to water - the more kindly the message the more beautiful the formations.

And here is the most intriguing part: that Dr. Emoto came to the conclusion that the most successful attitude to life would include 2 parts gratefulness (for life) and 1 part love, equating to the formula H2O!


The point I am making here, of course, is that in water can be found the very expression of the Divine. And in illustrating this matter further, Dr. Emoto demonstrated that when water is 'spoken to' - through words written on paper and shown to the water - and when frozen, the water crystallises and forms shapes revealing the feelings that the words transmitted!

These pictures show the different crystals that became visible when the words 'thank you' were shown to water as expressed in English, German, French and Italian: 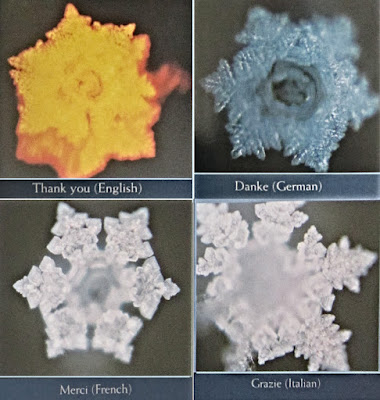 See how the national personality of each country is revealed in the shape and colour of each crystal! I suppose people will simply say there is a 'scientific' explanation for this, but why should science separate itself (as it usually does) from divine concepts?

But evidence of the divine is not just to be seen in water. Sacred geometry has revealed that there are natural shapes to be found that have properties that are equally Divine.  For example: 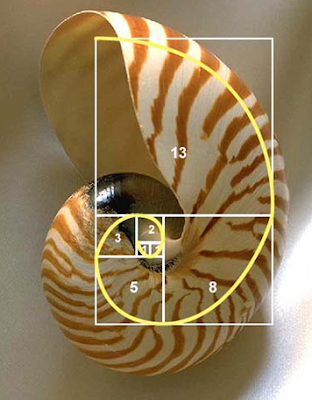 Here we have a picture of a Nautilus shell, and the numerical Fibonacci series that can be deduced from it. Not only in this form of creation but others too.

But the real proof of Divinity, in my view, is to be found in the lives of those who truly lived according to Divine teachings through their experience, such as Jesus and the Buddha. They set the example of how life can be, and gave substantial clues as to 'the Way'.

If we want real solutions to the world's severe problems, then surely we should look very closely at those teachings and apply them where we can, and adding them to our lives when it is possible to do so.

I recently wrote something about this to a friend about the lack of respect that is today found in our society.

It seems to me that true 'respect' can only come from devotion. That to me is the underlying aspect that's missing. And it's the devotion that Jesus spoke of when he summarised the commandments as Love of God and one's neighbour ... "with all thy heart and all thy mind".

It sounds as though I'm preaching, but Jesus was touching on a truth that a lot of people haven't thought on. That is that the inherent nature of us all is the same! In India they call it the Atma - the indwelling soul - that links us all one to another, so that if we slander or hurt we should realise that we only slander or hurt ourselves, and that the law of Karma will bring about just rewards one way or another - "what goes around comes around".

So we are not really separate. Outwardly we seem different, but inwardly all are the same.

I believe that until we come to properly realise that (and Christianity never has taught it properly except by individuals whose lives have been a demonstration of that truth) then true 'respect' will not materialise. 'Respect' is not something that can be forced or enforced. It must come from free will - from love. And a demonstration of that (by example) is the biggest possible challenge for politicians and employers!

Thank you for reading this!