A Matter Of Very Deep ConCERN? 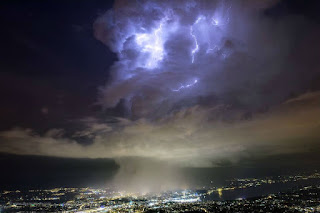 On July 19 (just gone) I began to think more deeply about the weather we have been experiencing in this area of the UK, and how the weather forecasters just do not seem to be too accurate about their forecasting. They say they have built bigger and better computers to process the data more accurately - but do they?

In particular, the bursts of wind under perpetually gray skies seemed to be odd; plus the fact that summers of old just did not seem to be of the order we've been experiencing this past year or two. And what about the freak weather conditions in Cornwall just a few day ago?

Oh, yes - it's "climate change" isn't it? Well, yes, I'd go along with that, but I'm beginning to suspect a lot more. Perhaps I'm just a suspicious type, but I looked into the strange weather phenomena and saw this photo of the sky over Zurich when the CERN Large Hydron Collider was being powered up: