Thirty years ago and more, shop assistants looked very strangely at me when I used to refuse a free carrier bag of any description. Now, many stores go overboard to stop giving you a carrier bag! 45 years ago I was putting leaflets into houses warning of changing conditions and the need to change our ways in respect of usage of resources, and the need to try being more self-sufficient. The trouble was I was overly conscious that the leaflets I was distributing were themselves made of valuable natural material, and that was very much in the days before re-cycling got underway.

But there were some people around in Birmingham who were sympathetic to my cause, and one had already gone so far as to switch his vehicle over to hydrogen power. And not just to save money. There were a fair number of people around then (in the 1970s) that were aware of the problem of waste and a potential future of lack of resources. Indeed, an organisation called The Club Of Rome published powerful arguments (bringing attention to the limitations to the availability of fossil fuels) for those who would take notice. Fossil fuels are becoming harder to obtain now, and mining is becoming dangerously invasive, adding to the issue of gases poisoning our eco-system.

I was an early follower of the Ecology Party, now the Green Party. (Not long ago I told Caroline Lucas she would be an excellent leader of the Labour Party!)

I purchased a bike in 1976 and took it with me when I went to London, where I lived for the next 32 years. It was an expensive bike, too, and a good one, sold to me by the locally well-known 1948 Olympic cyclist Tommy Godwin (he died only just after the 2012 Olympics, in his 90s). Within weeks of my arrival in London, it was stolen. But at least London had, and has, something resembling a well-integrated public transport system.

But the powers-that-be pushed the ecological issues aside in favour of economic growth and created doubt about the arguments or inferred that solutions would be found. (Eh?) The voters didn't think the matter was important enough. And they wanted to pay their bills: they felt that the future would look after itself.

Now that we've been seriously experiencing some of the consequences of our mis-spent form of living, it has taken a 15-year-old Swedish girl named Greta Thunberg to be the main focus for action and come forward and force us to take notice. She recently spoke to the United Nations and made her case for immediate action. 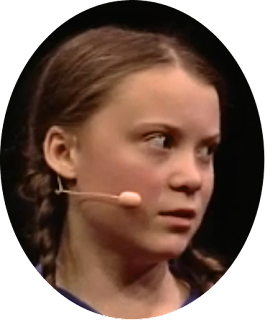 Go to listen to Greta's 11 minute talk by clicking here.

The issue of Climate Change, is, indeed, a hugely important one. David Attenborough says so, and it is.

But it is no less important an issue than the wars that have been perpetrated and which have proceeded to ravage the world in increasing ferocity for the last sixty years, with huge numbers of civilians being killed, maimed and forced into a life of fear. How many people have tried to escape their country of origin in the Middle East and Africa? And so many other places, too, have their own share of deep troubles, as always, man-made.

And it is no less important an issue than the maltreatment of wildlife throughout the World, such as the Orangutans in Indonesia, but also the marine life that is poisoned by toxicity and plastics.

These THREE major issues reveal what mankind has become as it has burgeoned in less than 200 years into a mammoth population of 7 billion people fed by a media stream of theatrical and musical nonsense. Yes, non-sense! There is not much of the world left to ravage for resources and food, much of which we seek is of a luxurious nature for our consumption. And the development of beef farming that has not only taken over swathes of former forest land but also pumps tons and tons of methane gas into the atmosphere.

Because we tend to think of these issues as being prevalent a long way away, we also tend to think (just like the climate change issue) that they are not really connected to us. We might send token gestures of charity to patch up the wounds, but do we stop to think about what is really going on and challenge our leaders about them? No, we have always said "they" will sort it out. Well, "they" say they do what the voters tell them to! What a merry-go-round!

No, there is NO scientific answer for all this. The ONLY answer lies within ourselves! We, the creators of this combined situation need to reverse it by looking into our hearts to find our real selves, and then to live and act according to the peaceful nature that in fact is our real selves.

We need a religion of love to abide by; one that stems from the core of our hearts and not from the pulpit, whether Christian or Muslim or any other formal religion.

WE ARE ALL ONE. We need to live as though we are that.


And (if we are able) to realise that there is one creator
and that we all owe our lives to that One.
Have we thought that perhaps we have been entrusted to act as good stewards
of all that has been created by the One?
Let us do something by utilising the Rights that we have fought for in a responsible way.

How do we generate a sense of urgency?
By putting these issues on the table as a matter of priority.
Just as Kennedy did in 1960 to have man put on the Moon by the end of that decade. It was achieved because it was made a priority, despite the huge technical difficulties imposed by the challenge.


Thank you for reading this!

Posted by John Lerwill at 00:52 No comments: