A believer (or knower) of God will, without hesitation, seek help from the object of his adoration, particularly when in some danger. There are countless times when God's protection has been sought, but there are some stories about this aspect that stand out in ordinary human experience. Two such stories follow, the first about an American Army unit at war:


Over 100 years ago, during World War I, the 91st Infantry Brigade was preparing to enter combat in Europe. The Brigade Commander, a devout Christian, assembled his troops and gave each of them a little card on which was printed the 91st Psalm, the same number Psalm as their brigade. They agreed to recite that Psalm daily. After they had begun praying the Psalm, the 91st Brigade was engaged in three of the bloodiest battles of World War I — Chateau Thierry, Belle Wood and the Argonne. Other American units that fought in the same battles had up to 90 percent casualties, but the 91st Brigade did not suffer a single combat-related casualty.

Psalm 91 as in the KJV (to enlarge, please click on the text below): 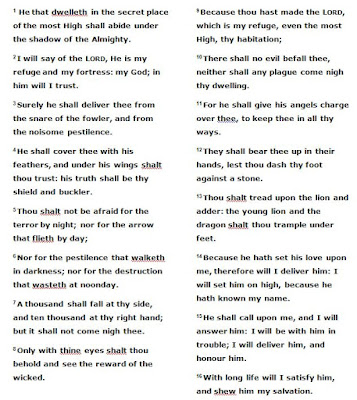 There have been a number of individual instances of this kind when the 91st Psalm has been invoked, but the following story is of quite a different hue, but with the same theme - of reliance on God.

Though Hinduism has numerous gods in its pantheon, their philosophy is that all leads to the one God; that all is One. Each individual god they adopt and pray to is their perception of God in one of his forms. But it is not the figurine they worship. A Hindu, therefore, sights a Hindu god in his dream or has a vision of a god in real life, and that’s believable because the person reveres that god. But a Christian claiming to see a Hindu god who ends up saving the man’s life…is something which is unheard of. The following relates such a story:


It was 1879, and the British were ruling India. An officer in the British Army, Lt. Col. Martin of Agar Malva, was leading the army in the war against Afghanistan. Col. Martin would regularly send messages of his well-being to his wife. The war went on for a long period of time and Lady Martin stopped getting his messages. This naturally worried her.

One day, while riding on her horse, she passed by the temple of Baijnath Mahadev. The sounds of the conch and mantras attracted her. She went inside the temple and came to know that the Brahmans were worshipping Lord Shiva.

The Brahmans saw her and noticed that she was sad and tense. They asked her what the matter was and she explained everything to them. They told her that Lord Shiva listens to the prayers of devotees and takes them out of difficult situations.

On the advice of the Brahmans, she started the ‘Laghu-rudri Anushtthan’ of the Mantra: ‘Om Namah Shivaya’, for 11 days. She prayed to Lord Shiva that if her husband reaches home safely, then she would get the temple renovated.

On the last of the ‘Laghu-rudri’, a messenger came and gave her a letter. It was from her husband. He had written:

I was regularly sending messages to you from the battlegrounds, but suddenly the Pathans surrounded us from all sides. We were entrapped in a situation where there was no scope of escaping death. Suddenly, I saw a Yogi of India with long hair, carrying a weapon with three pointers (Trishul). His personality was amazing and he was manoeuvring his weapon with a magnificent style. Seeing this great man, the Pathans started running back. With his grace, our bad times turned into moments of victory. This was possible only because of that man of India wearing a lion skin and carrying a three-pointer weapon (Trishul). That great Yogi told me that I should not worry and that he had come to rescue me because he was very pleased with my wife’s prayers.

Tears of joy fell down Lady Martin’s eyes as she read the letter. She fell into the feet of Lord Shiva’s statue and burst into tears.

After a few weeks, Col. Martin returned. They both visited the Baijnath Mahadev Temple to thank Lord Shiva for saving Col. Martin’s life. It was then that he realized the striking resemblance of Lord Shiva to the Yogi who’d appeared on the battlefield to save his life. 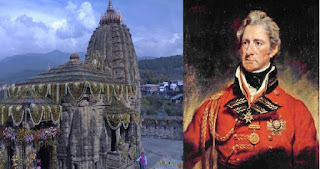 Both became devotees of Lord Shiva. They helped in rebuilding the temple premises and donated money for its maintenance. The British couple’s name is engraved on the slab inside the temple premises. To date, the Baijnath Mahadev Temple is the only Hindu temple in the country that was built by British!

And so it is. God is available in many guises!

Thank you for reading this.

Posted by John Lerwill at 12:16 No comments:

In a world where obfuscation creates a fog in our daily lives whenever we read a newspaper or watch the TV news, what appeared this week in the press should not be surprising. But it was: to me at least.

A few times in the week I purchase the only so-called 'quality newspaper' that my budget will allow: the i. Generally, it gives me a reasonable view of what is happening in the affairs of this world, but there are quite a few times when it has let me down. And this week was one of those weeks where it let me down.

I suppose my reactions are as a result of having a good insight into Indian culture (for a Westerner, at least) as I had been following the early stories of the India-Pakistan conflict and gained a clear perspective that India felt it had to take some punitive action as a result of terrorist activities in Kashmir, by a group that is based in Pakistan. That terrorist activity had killed 40.

However, the way that the i (and the BBC TV news) portrayed it, it gave all the appearance of two old colonial adversaries throwing their toys out of their prams. Thankfully, I went on-line and read a far more realistic appraisal of the situation by Robert Fisk in the i's old mother newspaper, The Independent. But the fact remains that our press is generally entirely obfuscating in how they report affairs connected with anything outside Britain's shores.

But even within our own shores the press is often mind-blowingly misreporting events, and one that caught my eye was a matter that related to two health experts, both of them originating from Indian culture. Again, my insight into their culture made me see far more, probably, than the ordinary Western eye. What follows should provide much food for thought!

In the i (again), the headline appeared: "Vegetarian diet led to my mum's early death, says NHS cardiologist". Now, that cardiologist's family were from the Indian sub-continent, and when that people talk of a vegetarian diet, it is usually of quite a different nature from what we regard as 'vegetarian'. For a start, a well-based Indian diet is derived from a lot of wisdom (particularly about how the ingredients should be balanced, and lifestyle) and is not lightly regarded. In the West, we seem to have quite a different perspective and which is often based on loose ideas.

Anyhow, the i article then told us that the NHS cardiologist described how "Growing up I witnessed [my mother's] regular consumption of starchy carbohydrates and ultra-processed snack foods of biscuits, crisps and chocolate." He then went on to describe her one main daily meal consisting (inter alia) of "a mountain of table sugar". This all led (understandably, and sadly) to her poor health. But how could her chosen diet be said to be representative of true vegetarianism (as intimated by her son, an "NHS cardiologist")?

However,  the i allowed this misleading article to form a basis for the inclusion of advice from Western nutritionists who seem anxious to put down the idea of vegetarianism/veganism by any means at their disposal.

The press was not having a good week, but it did manage to finish on a 'high' when (of all papers) the Daily Mail published an article giving a remarkably different line of thought on the same topic.

On Saturdays, we purchase the Daily Mail because of the excellence of its weekly TV supplement, but I have very little time for the main body of the newspaper. But I still browse through its articles as I sometimes find something of interest. This week, the Mail produced an article that completely and successfully negated the notion carried forward in the i 's disappointing article.

The Mail's headline stated: "This NHS doctor says changing his diet helped cure his heart condition..." and "I'm Proof Food Is The Best Medicine". The article - written by another person from a family of the Indian sub-continent - describes how the writer's mother had a serious health condition, but rejected medication in favour of a radical change of diet even though having no background in medicine, "but her Indian upbringing had given her an appreciation of the food and lifestyle and, as a trained lawyer, also used her research skills and analytical approach to examine the scientific literature and create a plan of action".

The writer then states how he watched her "completely overhaul her diet ... packed with vegetables, legumes [lentils and chickpeas] and whole grains, combined with good sleep patterns, exercise and meditation." A healthy and completely balanced solution, as distinct from the report detailed in the i.

But it so happened that the writer (Dr. Rupy Aujla) developed atrial fibrillation (AF) at quite a young age and soon after beginning a medical career. Again, like his mother, being faced with a choice of extreme medical treatment or an alternative approach, he changed both his diet and lifestyle. Within a year the AF had gone. He then began to apply his drug-free therapy to his patients, with substantial success. Dr. Aujla now promotes his food recipes for the public at large.

But let's make one clear observation here. The findings of Dr. Aujla are based on wisdom that has always been available in India and his results make it clear that the attempt at superimposing western science on eastern knowledge often brings about a throwback when one is faced with an immense difficulty at hand. The difficulty doesn't have to be about health as a  spiritual crisis occurred in my life which ultimately caused me to find peace of mind through the rejection of religion as we are commonly taught, and to find true inspiration from the East.

Thank you for reading this.

Posted by John Lerwill at 03:14 No comments: